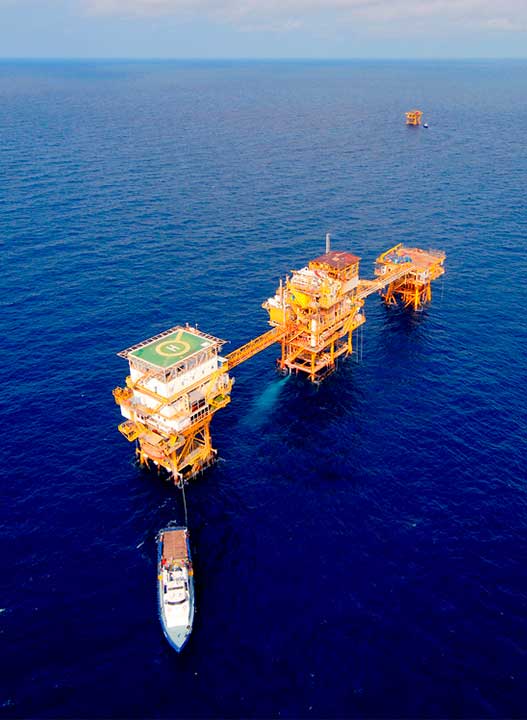 We continue to look for new oil and gas fields and develop existing oil and gas fields in supporting the achievement of national oil and gas production targets. With increasing business and operational challenges, we continue to improve efficiency, effectiveness and competitiveness in carrying out a safe, compliant, and environmentally friendly operation. We also support the progress of the community where we operate through various social responsibility programs for the realization of an advanced and independent Indonesian society.

We produce tens of thousands of barrels of oil and hundreds of millions of standard cubic feet of gas per day from onshore and offshore fields in our working area in Kalimantan.

Our success is driven by the commitment of all employees who have high dedication, experience and performance and adhere to the Company's values: Trustworthy, Competent, Harmonious, Loyal, Adaptive, and Collaborative (AKHLAK) to achieve PHI's vision to become a World Class Oil and Gas Company

PT Pertamina Hulu Indonesia (PHI) was established based on Indonesian laws and regulations on 28 December 2015 to manage a number of ex-termination oil and gas working areas in Kalimantan. Our presence continues a partnership with local communities that has lasted for more than a century through the discovery of oil at the Louise-1 Sanga-Sanga Field in 1897.

PHI is under the Pertamina Upstream Subholding - PT Pertamina Hulu Energi (PHE), which is tasked with managing all Pertamina's upstream oil and gas assets and business activities in the Kalimantan region which consists of 3 Zones namely Zone 8, Zone 9, and Zone 10. 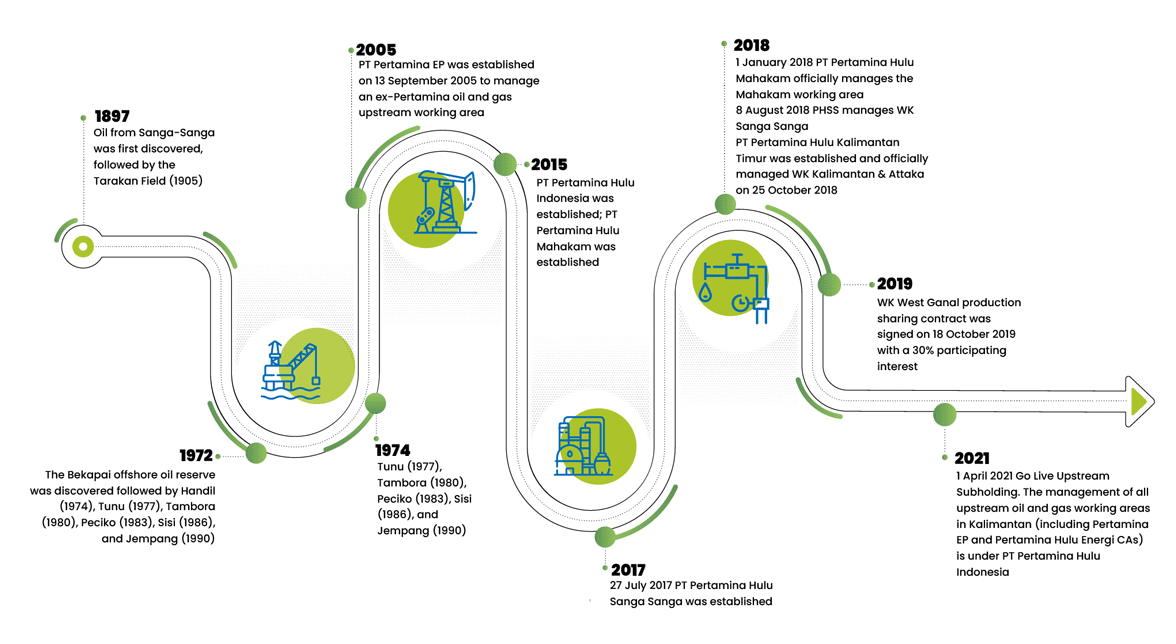 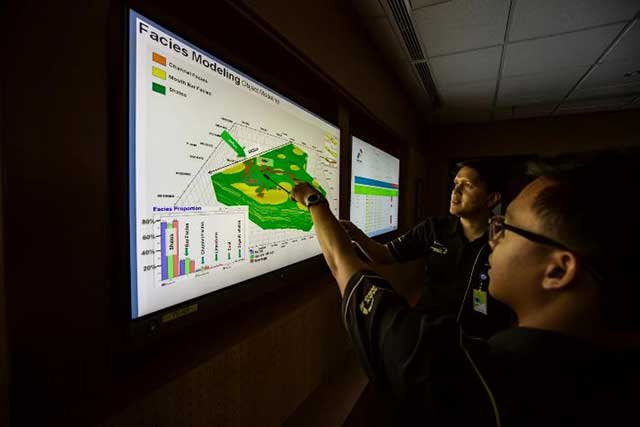 We apply various innovations and technology applications to find new oil and gas sources and maximize production from mature fields to support the achievement of national oil and gas production targets.

We continue to invest in finding new oil and gas reserves and maximize production from onshore and offshore oil and gas fields in the Kalimantan region. We keep developing new ideas based on research, joint learning with experts at Pertamina, and long experience in the oil and gas industry to create various technological innovations.

We implement various methods and innovations to accelerate drilling operations while significantly reducing costs. One of them is the Hydraulic Workover Unit (HWU), the first technology in the Pertamina Group and Indonesia to reduce drilling rigs. The HWU has been used to drill more than five delta wells in WK Mahakam operated by PT Pertamina Hulu Mahakam (PHM) and has proven to save up to an average of 37% of drilling costs using conventional rigs.

We have successfully implemented several innovations to maximize reserves and production increase through systematic, effective, and efficient seismic interpretation activities, management of low-pressure wells, and reactivation and optimization of abandoned wells. We used the SISCA (Hybrid Seismic and Multi Cone Analysis) method to map and quantify the volumetric gas reservoir in the shallow zone throughout the Sisi Nubi field, successfully increased new reserves by 159 Bcf. We also implemented the Permanent Coil Tubing Gas Lift (PCTGL) to produce gas in old wells with low pressure and optimize surface facilities. The Low-Low Pressure (LLP) method is also proven to reduce gas pressure already in the low-pressure phase, extending the gas production life to be longer than expected. Another supporting method is the RESA method (Effective Recompletion of Abandoned Wells), which is carried out by reentering abandoned CBM (Coal Bed Methane) wells and installing tubing cemented all the way to the surface. The exploitation of abandoned CBM wells can save around tens of billions of rupiah in costs and has a shorter operational time of about 12 days than other methods. Production continues despite earlier prediction that the wells would be non-productive.

We also continue to innovate to maintain reservoir pressure conditions, control sand, water, and scale. The Sand Consolidation method in WK Mahakam is done by injecting chemical compounds into reservoirs in shallow zones with sand problems. This innovation saved up to millions of dollars per well in costs when compared to conventional methods. We also apply Scale/Sediment Removal technology to overcome scale/sediment clogging the flow of hydrocarbons so that oil and gas reserves in the well can continue to be produced. This technology can save up to billions of rupiah per well compared to conventional methods. We also use the Robot (Robust Outflow) method to increase production capacity by utilizing available equipment to minimize modification costs and avoid production loss. This innovation increased the revenue of sandy well’s production by trillions of rupiah.

We keep innovating to support safe, effective, efficient, and faster oil and gas operations. We developed the Casing While Drilling method, which is a method that combines drilling and casing installation simultaneously. This method was carried out in the Bekapai field, dubbed as the first done by an oil and gas company in Southeast Asia, in an 805-meter-deep well for a shallow gas reservoir. There is also the SPIRALTUBE method to overcome the absence of gas leak detection devices at the Tunu well. This innovation increased gas production to 435 MMscf, or equivalent to tens of billions of rupiah. The OPTIDRILL innovation is also a method that shortens the drilling time of re-entry wells by eliminating invisible lost time in several drilling stages, thus increased cost efficiency. OPTIDRILL reduced well-drilling costs by around 40% of the total cost, equivalent to hundreds of billions of rupiah. An offshore well in WK Mahakam implemented the OPTIDRIL method, and the completion time was reduced by 56% (from 30 days to 15 days) after more than 50 years of operation.

We also improve the oil and gas operations’ efficiency, effectiveness, and safety through the Cement packer (Ceker) innovation, an isolation method by injecting cement into the annulus between the tubing and casing to access productive zones above the production packer. Ceker is an alternative/substitute for conventional production packers. This innovation shows a satisfactory level of success, and all is done without using a rig (rigless). The CEKER method has contributed 0.3 BCF and 269 MBO (1.8 BCFe). There is also FANA (Frame Anti Lama), an innovation to replace scaffolding that utilizes a more rigid, simple, and flexible (adjustable) frame structure to support the work of raising and lowering the BOP (Blowout Preventer), riser, and RJU (Rotor Jack). FANA also serves as a safer work area for personnel when removing and reinstalling rods and PCPs. This innovation accelerated construction and dismantling time to around 3.91 days per well, saved tens of billions of rupiah, and increased oil production.

PHI continues to invest in developing strong and reliable workforce in the upstream oil and gas sector through training, certification, mentoring, project assignments, and on the job training. About 745,000 learning hours are implemented by the company annually. Another effort to improve employee competence and create knowledge assets that provide added value to the Company is to implement a knowledge sharing program, with the aim of maintaining best practices and implementing them widely within Pertamina.

Our workforce management strategy is integrated with the company's business strategy, so that the company can develop and allocate resources that provide a competitive advantage, encourage innovation based on a corporate culture that meets world class high performance culture, and promote harmonious industrial relations.

Supported by more than 2,500 workers who are trained and have global experience in managing both offshore and onshore operations, we believe we are able to achieve the company's vision and mission by continuing to strengthen our investment strategy in workforce management.

Our workforce management has received a lot of recognition from various parties in the national and international arena.